Google launched a new logo today and it’s a font change. Only appropriate that they have a makeover since announcing a corporate structure change to the new Alphabet, Inc. – holding company. There’s a video on the home page of Google and a post on Google Blog reviewing the change.

I first stumbled across Google in early 1998 and instantly loved the results I got there as compared to more than a dozen other search engines available at the time. It absolutely sounds bizarre to think of more than 3 or at most 4 search engines. There are specialty search sites, and a few industry specific options now – but can you imagine needing to decide what search engine to use today? I was just making the decision to change careers after learning that my love of search gave me enough knowledge to start consulting in SEO to help small businesses get search visibility.

Here’s a graphic showing those competitors from 1999 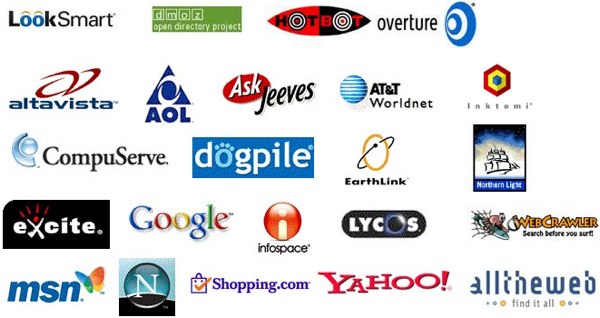 I had written a post for my email newsletter in March of ’99 about newly discovered technique to show up well in search by creating landing pages tweaked for specific search engines and included a graphic above showing all the current players at the time.

Google was there in the middle with their second iteration on their logo after launching in late 1998. Here’s Google’s official timeline page. It’s fascinating to read through that listing of events (although a bit frustrating to click on broken links throughout – assign someone to update that Google!). Reviewing that timeline is like retracing the steps of my career through Google events.

In 1998 Google launched the “Google Friends Newsletter” and I instantly subscribed. As I look back through old computer backups, I find some as old as 2006 and it reminds me how much more important email was than blogging in the early 2000’s. That newsletter survived until at least July of 2011 and those still exist at Google Groups here. I read those emails religiously for years to get an ongoing peek inside the Googleplex and follow product developments. 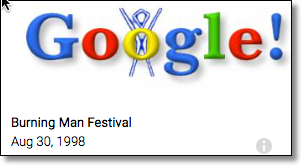 The timeline mentions the first Google Doodle – which incorporated Burning Man in 1998 and that reminds me that we didn’t used to get as many Google Doodles as we do now – they have a few more lately. I count over 20 in August (in the U.S.) and they say on their Doodles “About” page that they’ve done over 2000 of them since then.

In 2002 they grabbed my attention with the launch of Google News – I’m a news junkie and this very quickly became my browser’s Home Page”. Today I’ve activated nearly a dozen Google News alerts which keep me on top of multiple personal and business interests from bitcoin to Instagram to coffee.

In March of 2003, Google launched Adsense and I suddenly saw a way to make some income on one of my websites. The first month was several hundred dollars for me and that soon escalated to as much as $2,000 a month at it’s best. That was before Panda in better days…

In April of 2004 Google launched Gmail and I got sucked in just a bit further to the Google suite of products. I was using blogger self-hosted blog, Google custom search, Picasa, Spreadsheets, and a half-dozen other services. I posted an article on my blog about my love of Google products and how tough it would be to divorce myself from that suite of services.

In 2005 – that’s 10 years ago – Google introduced Analytics, based on a company called Urchin that Google acquired in 2005. I had been using Urchin and was thoroughly hooked on the great data about keywords and visitor data. Google made it easier to use and it was free – again, I’m pulled deeper into the vortex of Google products. At this point the consulting work was going well and I was just about to take a vacation to Italy and that gives me an opportunity to play around with newly launched Google maps to see where I’ll be going in Rome, Tuscany, Florence and Venice.

2006 brought the launch of Google Trends, which let everyone peek behind the curtain, deeper into Google data over time to show how interest from searchers varies. This was a brilliant move toward transparency and open data, which was just beginning to expand along with my interest in open standards.

Now I’m fully in love with the company and that’s when I get a call from a Google recruiter about working for them. After three conversations with Google, I decide to accept another corporate position. I always wonder how different things might be if I’d taken that extra step and gotten the Google offer, especially after in 2007 they win #1 in “Best Places to Work”.

Market Dominance of Google as of April of 2018: