The sensitivity of search string data is suddenly on everyone’s mind due to news of the AOL data leak on a research site this week. Search Engine Watch editor Danny Sullivan is set to interview Google CEO Eric Schmidt in the premier event of the Search Engine Strategies show in San Jose. Guess what his first question is? Give us your thoughts on search data privacy – (in so many words) while holding up a copy of the New York Times. Schmidt seemed not to flinch at the question he must have known was coming in this informal conversation format arranged by Sullivan. 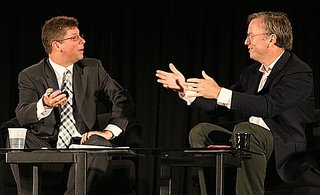 The leaked AOL data is actually from Google results, but AOL is clearly the bad guy here, since they leaked the info on search strings of 658,000 of it’s members over a three month period and 20 million compromised searches. Sullivan pointed out that the New York Times had been able to trace the somewhat anonymized AOL member names through some very light detective work and found an AOL user whose data was part of the leak. That user was featured in a photograph on the front page and profiled. Sullivan made no connection to Google of that AOL blunder, but asked Schmidt to comment on search privacy and the sensitivity of the data.

Schmidt reminded Sullivan of the recent Department of Justice demand for all search records over a month’s time and Google’s refusal to give it up to DOJ. He suggested that Google works very hard to protect user data and they clearly do deserve kudos, both for refusing to give up the search data to the DOJ and for their stance on protection of that type of sensitive information. They went to court with the DOJ to take a stand on privacy of search data, rather than meekly turning it over as the other search engines did. That move gained Google some credibility which supports the famed “Do no evil” mantra of the company.

Schmidt recalled several cases of what he called “crazy people” who have been using Google search to plan and carry out all manner of nefarious deeds, from murders to suicide to stalking. He emphasized repeatedly that there is no way to stop bad people from doing bad stuff using search, but that Google is doing all they can to make it a safe environment for users. Schmidt also pointed out how Google makes it easy for users to remove their phone numbers from the Google search results. (Story for another time, but not so easy, and why is it accessible at all?).

Click fraud was next on Sullivans’ agenda and he asked how Google was addressing it within the Adwords pay-per-click system. Schmidt steered clear of discussing the court case, calling it a “business negotiation done in the courtroom.” He said they we’re reluctant to discuss both user and advertiser data, and again, we’re doing all we can to address click fraud.

Sullivan graciously backed off of the sensitive topic and moved on to the next news item of the week, the just announced Google partnerships with both MTV and MySpace. The MTV deal will allow Google to sell video ads surrounding clips of hit shows on the network. Early take-up may be only from major advertisers and it is not clear if the video ads will be sold with the automated system used for adwords, since the video ads will clearly need to be vetted for ratings and quality. The MySpace deal means that MySpace will show Adwords ads throughout communities on the social networking site and becomes the sole provider of search to all Fox Interactive Media sites in the deal. 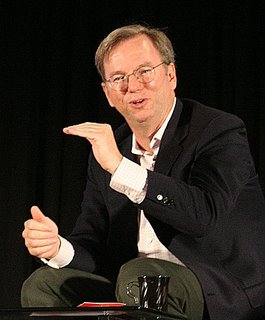 Schmidt took the opportunity to emphasize the value of targeted ads being shown to users in all venues when he pointed to the radio deals, video deals and the standard text ads used by publishers of each of those sources. Sullivan had asked about the value of tracking and metrics for advertisers using Google Analytics, allowing them to do conversion studies and understand the value of their ad spending.

Sullivan used that Adwords conversion stats issue to segue’ into a more delicate topic when he asked Schmidt to comment on the value of Adsense to publishers, adding a caveat to that saying that since Adsense was so valuable to publishers, that it had lead to huge amounts of junk on the web from junky publishers filling web site pages with garbage in order to place the contextual ads across loads of informational, but mostly junky sites. He suggested those sites clog up search results and produce little value for users other than to click on ads. Schmidt replied simply, “These are the problems of success.” He went on to explain that Adsense has far exceeded expectations seen for it.

Schmidt discussed the proprietary Google search algorithm and how carefully it was guarded within the company, claiming that it was so closely held that “I have chosen not to know it.” That statement had many SEO’s in the audience groaning with some sort of envy of Schmidt being in a position to know that tightly secured secret algorithm and chosing NOT to know about it. A kind of stunned silence was palpable among many in the room, although that statement must have gone right over the heads of the mainstream press in the room.

Sullivan asked about copyright issues within the “Book Search” and other uses of print and online text within Google searches. Schmidt commented that he had learned how fluid and open to interpretation copyright law was, but that their own legal staff had determined that they were completely within legal limits with book search and “Fair Use” rules within copyright laws. He stated flatly that Google “Must respect copyright” and emphasized their commitment to do so, while claiming that book search was within legal limits.

“Google’s mission is to organize the world’s information and make it universally accessible and useful.” That statement comes from the Google corporate info page and is well known and often quoted. Sullivan moved on to a lighter note with a reference to the Visa slogan adapted to Google, saying, “Google, We’re everywhere you want to be!” (Which coincidentally turns up a ZDnet forum post on Google instead of Visa’s catchphrase, as number one search result at Google.) Sullivan noted that with all the Google products coming online, such as Gmail, search, spreadsheets, calendar, personalized home page, radio ads, video ads, text ads, shopping search, Google Maps, etc., that “You might as well give me the Google implant and be done with it! 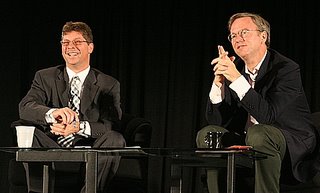 Photo copyright 2006 by Mike Banks Valentine
While that got a good laugh from the audience and even from Schmidt, it did cause some reflection from audience members in my quick glance around to see heads tilting to the side in contemplation of the quip.

Sullivan wrapped it up by asking some lighter questions in rapid fire fashion for quick responses from Schmidt, but one question got a great response from the Google CEO when Sullivan asked, “How often do you personally search?” Schmidt quickly replied that he routinely searches between 50 and 100 times a day and that he uses searches to inform his business decisions. Schmidt then told the audience that he had been asked by someone once “Did you know that there are more outhouses than Tivo’s?” To which Schmidt had some illuminating expanded comments. He later did some of his own searching to find that the question was in fact true previously, but that the trend had reversed and that now there are more Tivo’s. He even had percentages to back it up.

That showed that he very much believes in search and uses it himself to, as he said, inform business decisions. Whether that means he is investing in Tivo or getting rid of outhouses is up for debate, but was an interesting tidbit that may be thrown around the press from the SES show coverage (I’m sure Schmidt will hope it goes no further than that).

Another Sullivan question, “What is your favorite Google tool?” to which Schmidt replied, “My favorite is the search tool, but beyond that, it is the ‘Certified by Google’ tool,” referring to what has been called Gbuy by commentators. That allowed a bit of expansion by Schmidt on the new tool, which was clearly something he wanted to get a plug in for as a new service. Schmidt is a likable guy and everyone allowed him the plug as Google needs a bit of positive press due to the bad PR they are currently getting on “Certified by Google” with the eBay policy of not supporting the service.

Google, Yahoo & MSN Research Laboratories: What Makes it from Idea to Product?