I spoke with Jonah Stein of Alchemist Media briefly after his presentation on Search and Privacy at Search Engine Strategies in New York last week and he mentioned that he had just seen a taping of the Colbert Report. The buzz is that Colbert would like to rank first for “Giant Brass Balls,” according to Stein. So I’m here to do my part. But Stein suggested “Greatest Living American instead. Well, I’ll do my part there as well. 😉

But what about “Truthiness? A word Colbert invented, should rank for the man who created it! So here’s to great experiments and a nod to Jonah Stein for initiating it.

“But wait!” You say, “I thought Google made Google bombing a thing of the past?” 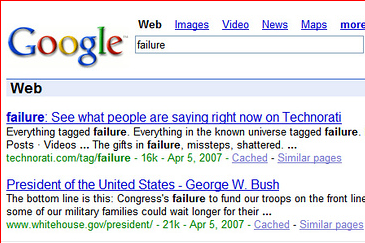 Nope, it seems that the best known example – “Miserable Failure for George Bush – popped back to a #2 position briefly when the White House added the following text to the Presidents’ page:

The bottom line is this: Congress’s failure to fund our troops on the front lines will mean that some of our military families could wait longer for their loved ones to return from the front lines.

It turns out that if you use a word on the page being Google-Bombed, you will rank for it. Way to go President Bush! I’ll bet you wish you could be called the “Greatest Living American.” Here’s how you do it. First, put the words on your own bio page, then use the power of the presidential pulpit to ask that bloggers link to your bio page with the phrase as anchor text. You don’t even have to seem egotistical to accomplish this, you could simply say that our troops are the greatest living Americans.

Comments on this entry are closed.