I never would have noticed this myself, until David Berkowitz from “Search Insider” at Media Post finds the little nugget at Engadget and starts talking about the search element to the unfortunately named “See’n’Search Set Top Box“. Berkowitz suggests that

“… media companies, cable operators, and advertisers will want to discover more ways this technology can be used.”

Well let me pipe up here and offer a suggested use!

TV SEO may be on the horizon sooner than expected. Samsung electronics has introduced a “Set Top Box” (Demo Video here) hardware which allows a TV viewer to search for related content on the web. (Seems like they would be better off selling their chip to Motorola, Tivo, et al to incorporate into current cable and satellite and DVR boxes.) This technology is based on television standard “Closed Captioning” which provides text transcripts on screen for the hard-of-hearing. There is also metadata available for programs listing program titles, characters, news anchors, talk show guests and movie actors, and/or those appearing on-screen during broadcast.

That information is available over the air and is rich in what it takes for search engines to determine relevance – text. Now Samsung is offering hardware which can access that standard television closed caption and metadata and use it to search relevant and related information for viewers and display web searches for that data through a scrolling menu, rather than a keyboard.

This is a disruptive way to watch television, as you may have observed from the video above. But there are options, actually two or three options – which Samsung is apparently offering.

But I have a suggested best-by-far option – DVR such as Tivo with functionality which stores and saves all that information (metadata and closed caption text) as the program is recorded, for use later by laptop or PC.

Clearly those with DVR’s will recognize the value of making all of the information made available via the SamSung set-top-box accessible at a later time to use as you wish, allowing time-shifting of the search functionality as well as the recorded program.

So how long will it be before we (SEO’s) are optimizing our web sites and multimedia content for TVSEO? Clearly it opens up dramatic traffic potential for sites addressing items discussed in hot news stories, or products mentioned on talk shows, or any number of authority web sites on any conceivable topic which may be discussed on television.

I see the potential there for new meta data inserted in both the closed captioning and within web sites, which facilitate find-ability of information online through this new search window on television sets. (Official TV Show web site, links to advertisers, PPC ads, actor profiles) I also see many more players entering the market to mine this potential traffic source. Those who jump in early will clearly benefit.

Kudos to Samsung for clearing the path to television search – now I hope Tivo, Google, and the television industry, as well as cable and satellite providers will see the value and offer the option of truly interactive television by linking it to the web and allowing recording of the closed captioning and related meta data for later use.

(I’ll never understand why Microsoft didn’t go this way when they bought WebTV for $450 Million in 1997 – they had both audiences in hand. Maybe their potential marriage with Yahoo will help them see the way to do it now? No- Yahoo had the original social media site in GeoCities and wasted that audience too. Neither company knows how to make the most of their assets.)

Here’s what is available so far from Samsung on the box, beyond the video you saw above:

I’ve seen a secondary press release from Samsung distributed on February 14th Valentines Day all over the web, but the release below, distributed by Samsung on January 6th, the day before CES (Consumer Electronics Show) in Las Vegas in PDF form and lost to all in the crush of new product announcements, was made available on the Samsung site (available in HTML in the Google cached copy) – when will corporations begin to understand the web?

They’ve introduced the “See’n’Search Set Top Box” at CES where it is buried among thousands of press releases and 187 other mentions of Samsung electronics products at the show. They distributed a secondary press release on Valentines Day, neglecting to do some sort of tie-in to attract attention to their product using maybe a love theme?

Nope, but then it’s duly reported by engadget, parroted on Mashable and again repeated by Techmeme, then dropped again from notice. Samsung, in that secondary press release fails to say what they did say in the first release – that the unit will be available Q3 2008 (see below). I even saw a couple of tech blogs saying, “Samsung doesn’t say when the unit will be available” and thus the problem with bloggers, nobody does any research.

Samsung doesn’t make it easy to find, but there is an “About See’N’Search” page on their site.

Here’s the January 6, 2008 Press release from the Samsung web site promising delivery by Q3 of this year: 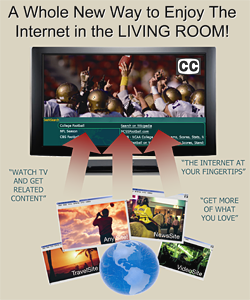 LAS VEGAS, January 6, 2008 – Samsung Electronics, a global leader in consumer electronics and digital technology, today is changing the way consumers enjoy the Internet in the living room with the introduction of its See’N’Search technology. Using just their TV’s, users can directly pull up Internet information and media-related content onto the screen program without the need for a PC/keyboard and or special content programming.

Where previous attempts at bringing the Internet to the TV have faltered due to the need for a keyboard or the overhead of special authoring through a content ecosystem, Samsung’s See’N’Search technology automatically suggests existing Internet media and information related to the programs users are already watching.

“See’N’Search technology will revolutionize how consumers will see and use the Internet in the living room in the next few years” said Alan Messer, director of connected consumer technologies of Samsung’s U.S. Research and Development Center. “By greatly minimizing the need to m
anually search for related content and special interactive content authoring, this technology enables consumers to directly watch or surf Internet content that is relevant to them.”

Just as a consumer would search a channel guide to see what’s on and when, Samsung’s See’N’Search set-top box uses the same information, in addition to the closed caption metadata that is present for most programming, to scour existing Internet content (HTML coding, Web video, etc.) and make recommendations that would appeal to the user. To do this, the system monitors the contents of the program being watched, using lightweight natural language technologies to determine the topics that are being discussed. When the user presses the “More Info” button, the See’N’Search UI appears on-screen with related information or media that the system found on the Internet. The consumer simply selects a piece of content from any particular topic, and See’N’Search takes them directly to that content.

What’s more, See’N’Search information can also be transmitted from the TV or set-top box to any connected devices in the living room, such as Wi-Fi enabled phones, tablets or laptops. This enables users to personally surf related Internet content without disturbing the family.

“Samsung’s See’N’Search technology gives a whole new way of getting to the Internet without turning the TV into a PC,” said Victoria Coleman, vice president of Samsung’s U.S. Computer Science Laboratory.

Samsung’s See’N’Search set-top box will be available in Q3 of 2008.